We’ve made a flying visit to Melbourne – partly for work, mostly to watch Real Madrid on Friday night 🙂 – and we’ve been struck by just how creative the city of Melbourne really is. Our first trip to ‘Paris on the Yarra’ was in 1995 and we’ve all commented on just how much has changed during that time.

After a breakfast spent people watching in Degraves Street we wandered to the famous Hosier Lane and took in the incredible street art – and a rather fine Hendrix-esque busker. Following the lane down to Flinders Street took us to The Australian Centre for Moving Image at Federation Square where we spent a few hours at the ‘David Bowie Is’ exhibition. Exiting Fed Square we walked past Flinders Street Station and were reminded of the Webby Award winning earworm, ‘Dumb Ways to Die’, written to promote rail safety for a Melbourne Metro Trains campaign. Then followed work meetings where we discussed some of the tools available on the Envato website – a global design marketplace that also happens to be headquartered in Melbourne (impressive HQ below). 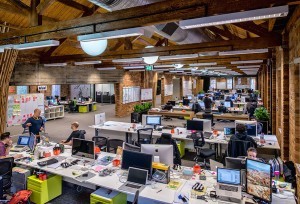 We’ve not even skimmed the surface but surely this type of creativity isn’t commonplace in all major cities? In Melbourne it almost seems on tap. So why is this?

The City of Melbourne actively encourages creativity. That is, they don’t just say it, they embrace it and allow it to grow organically. Street artists, pop up stores and buskers combine with heritage buildings, history, technology and startups to create a hotbed of creative vibes. And it’s incredibly catching. Wander through the business districts and you’ll see little separation – steel and glass blends seamlessly with unique storefronts, remixed historical buildings and hidden laneways.

Over the past twenty years the city of Melbourne has witnessed an incredible regeneration and has been ranked the most liveable city in the world four times as well as being nominated one of the first United Nations City of Literature. How has this transformation happened in such a short space of time?  We’d argue that by allowing a city, it’s surrounding suburbs (hello Brunswick and St Kilda) and most importantly, its people, to live, breathe and be themselves, Melbourne has conversely become more personal and beautifully unique.